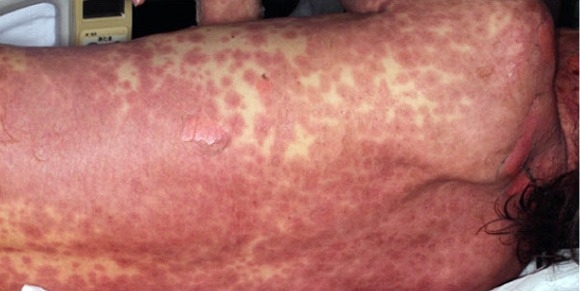 Stevens-Johnson Syndrome (SJS) and Toxic Epidermal Necrolysis (TEN) are two well-known severe drug eruptions. One to two in one million people are diagnosed with TEN each year in Japan. Twenty-five percent of that population die or have severe sequelae, such as blindness. Therefore, we need early determinations and establishment of treatment. However, it is crucial to analyze how to differ from regular drug eruptions, which get better without severe progress such as maculopapular, or clinical symptoms in early stages. Useful tests to diagnose and identify severe drug eruptions in early stages need to be established.

The theme of our research is to identify the elements which could be early prediction markers. We have reported that the blood concentration of Fas Ligand or granulycin, which is a cell death-inducing protein, increase in early stages of SJS and TEN.) Applying this knowledge, we were able to invent the quick diagnostic kit that measures the qualitative rise of serum granulycin. However, it is known that the numbers of granulycin increase as well as other diseases, so we are aiming to identify high specificity bio-markers by using proteome analysis from patients’ serums. Using proteome analysis from patients’ serums, we seek to create high quality biomarkers.
The mechanism of severe drug eruptions has not yet been discovered. This is due to no model animals that can be used for its research. Though, our research teams succeeded to create the model mice by patients’ samples. This was the first achievement in the world. The model mice will be considered for use in investigation of candidate mechanisms in severe drug eruptions and creating new medicines.

Research for Genetic Diseases in Dermatology

We are continuing our research to reveal new genes of various kinds of genetical skin disorders that will lead us to find new treatments. We also perform to make in vitro 3D skin models using patient’s keratinocyte, fibroblast and iPS cells. We cannot evaluate whether the treatment is effective or not before taking drugs. However, we can select the best drug for the patients. Making 3D skin models are useful because we can add several drugs in the 3D skin models. We strongly hope to establish the 3D skin models to select best treatment before the patients take drugs.

Searching each disease’s allergens is practical to consolidate data for solving unique cases.
By searching each disease’s allergen, we can improve the safety and consolidate data for solving cases, which we usually examine, but it is still difficult to conduct a treatment. Our research team is aiming to transmit helpful information for all the dermatologist. 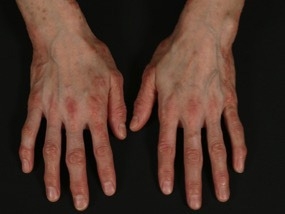 Example of dental treatment
Before and after. 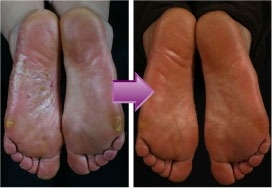 Examples）
・Skin disorder caused by hair dye.
(According to Basic Consumer Act, Article 23, The State shall, in order to secure the effectiveness of Consumer Policies, prepare facilities to undertake test.)
・Survey with Rhododenol in all cities of Japan 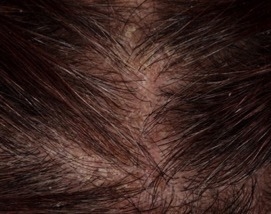 【Comment】
Studying abroad is a good chance and challenge to complete myself. At Niigata University, we can connect to any departments (basic research) to perform complicated experiments or consultations. Almost all staffs could speak English well, it seems like no language barriers in lab-works even without Japanese. There are many chances for presenting in conferences.